Since its inception in 1832 the incredibly popular luxury watch brand Longines has remained true to the original aspirations of its founder Auguste Agassiz.

Nearly 200 years on Longines maintains the original vision of Agassiz: Tradition, elegance and performance. These watch words, if you will, are no mere grandiose statements of possible intent. With Longines these self-imposed superlatives seem to have become some kind of mantra. Other adjectives that spring to mind are desirability and value. I would highly recommend you peruse the entire selection of Longines Master Collection timepieces. You will be repeatedly presented with beautifully finished, highly detailed and yet discrete timepieces at price points that put many other luxury brands to shame.

A defining feature is the sculptured bezel with a perfect rounded profile. This is no easy aesthetic delight to achieve. Machines will be used to stamp and then polish a basic contour. The meticulous finish will be completed by hand.

There is only one other timepiece I have owned that features this gorgeous geometry. The £24500 Girard Perregaux ww.tc. Now, I am not saying that Girard Perregaux and Longines are next door neighbours in the world of luxury horology, but this simply highlights that you have to jump to extraordinary price points to find another watch case silhouette that mirrors the Master Collection.

My own Master Collection Moonphase Chrono given to me as a wedding gift by my wife.

So, Longines: Very good at making incredible value, desirable and reliable timepieces. But pretty rubbish at showing off, to the point of being frustratingly unpretentious. Longines must be the most under-celebrated luxury brand on the high street. I appreciate that they perpetuate homage watches in their ever-evolving catalogue and many will acknowledge their contribution to timekeeping for various armed forces across the world for more than 100 years. But how many owners could name one of their in-house movements and the significance many of these had in the development of the wristwatch we know today?

I have a small anecdote to back this situation up. My wife was watching a repeat of BBC’s ‘Flog It’ recently. On this particular program was a lady trying to sell a family heirloom, which just happened to be an original Longines Weems.

Now, given that my wife is married to me, she happens to be the biggest horological ignorant you could meet. Therefore, I was proud and jubilant she remembered what she’d bought me for a wedding gift as she called me into the room. The so-called expert declared this vintage Longines, which was running, worth about £400-£600 and the reserve should be set at £400. I said to my wife that this was nonsense and it would go for over £3000. The hammer fell at £4150. Later investigations allowed me to realise that the show was originally broadcast 5 years ago. Thankfully, on this occasion there were two phone-in bidders that realised exactly what was being sold. The entire staff of experts related to the show had not recognised one of the most important timepieces in aviation history. It is this mass ignorance that vindicates my theory that Longines should shout about their history a little bit more. Leave the discretionary nature to your wonderful timepieces.

Just scratching the surface allows us to dig up hidden gems within Longines manufacturing history such as the 13.33Z chronograph movement, which was designed and produced in-house and was the first ever chronograph created for a wrist watch. How many people know that?

The 13.33Z’s development commenced in 1913 and evolved periodically until the 1970s when, much like a large proportion of the Swiss mechanical watch industry, it was phased out by the quartz crisis. It is also, subjectively, one of the most beautiful chronograph movements ever made.

Within this 50+ year span Longines was more of a movement manufacture than most of the obvious high end watch manufacturers when it came to the most useful complication, the chronograph. Longines built on this platform with flybacks, rattrapantes and even minute repeater chronographs, which are ridiculously rare even in the industry today. Longines was right at the top of the tree throughout this period.

This was never meant to be a history lesson on Longines (that will come at a later date), so I will get off my soap box now. However, I believe there is weight to this context as we discuss The Master Collection and its innovative creator. Search online auction sites and you will find Longines timepieces with these vintage in-house chronograph movements being sold for around £10000. This is an absolute bargain for one of the most historically significant and beautiful movements ever made.

Longines’ logo has always been the winged hourglass. This bore relevance as far back as 1919 when Longines was appointed official supplier to the International Aeronautical Federation. This led to their involvement with some of mankind’s early aviation pioneers, including Charles Lindbergh’s solo, non-stop transatlantic flight from New York to Paris in 1927 on which he wore the Hour Angle watch that he helped to design with Longines.

Way before watch brands were paying to be official timekeepers of major sporting events they were chosen for their technological prowess. It is no surprise, therefore, that Longines were timekeepers at the 1926 International Equestrian Competition (something they have stayed loyal to presently), the Brazilian Formula 1 Grand Prix in 1933 and Skiing World Championships in the same decade.

With their long and illustrious career of providing timepieces for the military, Longines were, justifiably, chosen by the British Armed Forces to be part of, what would become, the dirty dozen (so called because of the twelve different watch manufacturers), with the WWW – Watch. Wrist. Waterproof. Their offering was, arguably, the most stylish even though it adhered to the strict specification of waterproof, luminosity, Chronometer regulated, a rugged case construction, a black dial with arabic numerals and a subdial seconds. The case back was engraved with W.W.W. and the broad arrow marking.  Only 5000 of the 140000+ Dirty Dozen timepieces were produced by Longines, which is a surprise because they would have been one of the few brands capable of in-house manufacturing on a large scale at the time. It may be because Longines were already providing military watches, as they had been since World War 1. A Longines dirty dozen will command some of the highest premiums, out of the twelve different variants, when presented at auction. But, as is usual, I digress.

My own Master Collection Moonphase was given to me as a wedding present 15 years ago. At the time I was mainly interested in utilitarian sports watches. But I also realised I needed something that would still look fresh and understated in many years to come. Just look at it: It has 68 numbers and a moonphase on the dial and yet it still conforms to that sophisticated classical mould.

I love this watch. Not just because of my sentimental attachment to it but because it is such a visual treat, with much to admire, and is so easy to wear.

The movement is now based on one of ETAs tried and tested base movements.

I have owned two other eclectic Longines watches. The rather large, but still remarkably period-looking, Twenty Four and the Diver’s Hydroconquest GMT. The former is from the celebrated Legends collection where Longines regularly draws from its unparalleled range of historically important timepieces. This glorious collection takes inspiration from the watches in Longines’ past that have accompanied airborne and seaborne pioneers. The most notable being the Hour Angle watch for Charles Lindbergh and a watch that incorporated the ingenious “Weems System of Navigation” for Philip van Horn Weems.

The Hydroconquest GMT is from the Sport collection and is devoted to timepieces that are fit-for-purpose in a world where professionals rely on their timepiece in adverse conditions. It is presented in the most stunning sunburst blue. In a way this is emblematic of where Longines are today. This diver’s tool watch has extraordinary detailing and build quality. It can never be considered a pretty watch, but it does have a level of sophistication rarely seen in utilitarian timepieces. All for less than £1000. The Hydroconquest series is also home to the 5 second a year accurate V.H.P. collection. But that is a story for a future article. 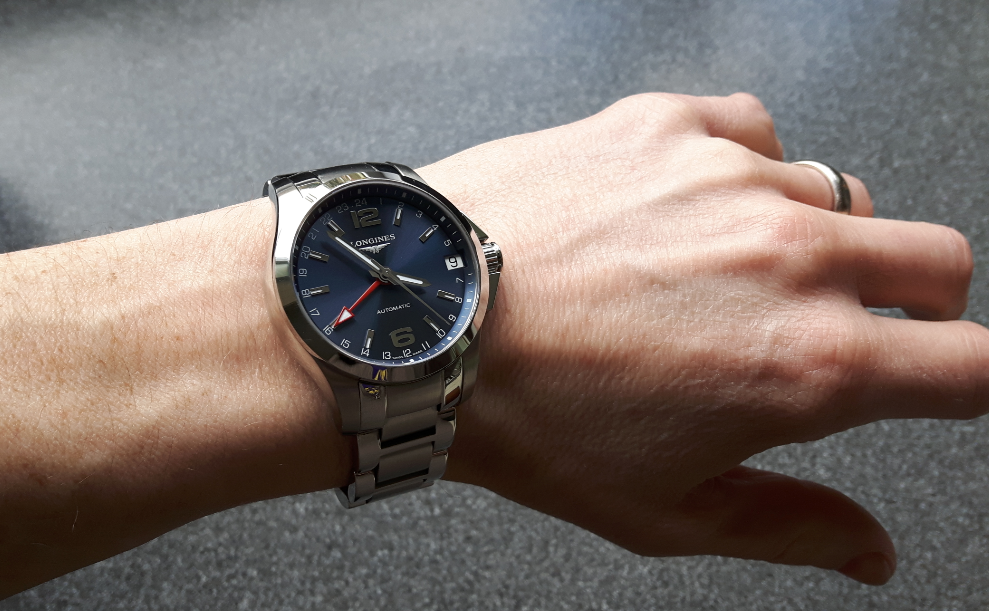 Elegance is indeed an attitude and the Longines Master Collection epitomises this. The entire range highlights this inherited philosophy. Even though a lot of the timepieces focus on utility the design is about as far as is possible to get from being extemporaneous. And yet it appears to be so effortless. This is an indication of pure design.

If you are considering a sentimental purchase to honour a birthday, anniversary or, like me, your wedding day, I would highly recommend one of the exquisite timepieces from Longines Master Control selection. You can then settle down for a lifelong indulgence of reliable luxury.

Other highlights within the collection (all come with multiple dial and strap/bracelet options):

All words by Richard Atkins. All images by the author or Longines, unless stated. This article may not be reproduced in part or in whole without the permission of the author.